It appears that the story of little Victoria was a hoax perpetrated on KFC: http://gawker.com/little-girl-getting-kicked-out-of-kfc-was-reportedly-a-1595066434. While the investigation continues, that does not nullify the good work that KFC’s social team performed. The black-hat in me is now thinking what a great way to get national publicity for only $30K.

Original article:
We can all learn a lesson from KFC’s PR team about how to handle a potential social media crisis. Their swift and public acknowledgment of the problem and actions to cure redirected the negative momentum and effectively neutralized the situation.

The social media crisis started when 3 year old Victoria and her grandmother Kelly Mullis stopped by KFC after one of Victoria’s medical appointments. Victoria was the victim of a dog attack that took her right eye, broke her jaw and left visible facial scarring. The little girl was hungry so they stopped by the Jackson Mississippi KFC to get some mashed potatoes as that was edible given her broken jaw. As they were eating and employee said the following: “We have to ask you to leave because her face is disrupting or customers”.

On June 13th, the story about Little Victoria’s incident with KFC spread as quickly as the Internet’s indignation can travel. The Huffington Post, Mirror, and Reddit were popular distribution hubs for the story.

Shortly thereafter KFC’s social sites were on fire. As of the 6/16/2014 there are 685 comments on their Facebook page regarding the topic. Elaine Jones fired the opening shot: 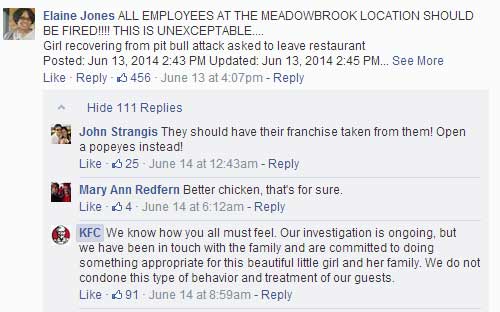 KFC didn’t waste any time getting a responding. At 8:16 AM on Friday the 13th they started replying to Twitter users who expressed distress over the employee’s action.

They were a little slower on Facebook as the hate storm hit at 2:43 the 13th. Their social media response team may have left for the day as it wasn’t until the 14th at 8:59 AM that they responded.

After weathering a blistering social storm, on Sunday the 15th KFC releases the following statement:

Once that statement was released they continued to address critics on their social sites. That effort extended through Monday the 16th when these screen shots were taken.

Granted, the flood on Facebook was so great that it just wasn’t practical to respond to all the commenters.

One notable observation from all this was the lack of vocal outrage on Google+. Take a look at their page: https://plus.google.com/u/1/+kfc/posts. There are only 7 negative comments about this incident. I guess when it comes to expressing strong opinions Google+ isn’t the preferred platform of choice.

Takeaways from the KFC Incident

This whole incident put a spotlight on how to properly deal with a social media crisis. KFC’s team did the following right: