Social media has decentralized the control companies have over their brand. Embracing brand advocates in lieu of fighting them leverages your customer base to do a great deal of online marketing for you. While many industries have embraced this, think of Lays Do Us a Flavor, movie and recording industries, are still persecuting brand advocates in the courts. In 2008 Monte Python took a different approach. Seeing the popularity of the videos uploaded by their fans to YouTube, they decided to embrace this distribution method rather than fight it. This resulted in a staggering increase in sales. Fast Company pegs it at a 23,000% increase (no that is not a typeo).

The Old World View of Marketing

The problem that many media companies have is unauthorized uploads of their videos to sites like YouTube, Vimeo, etc… . The executives see this is a violation of their copyright and thus less royalty money. These old economy execs see YouTube as a freeloader paradise.

In the new era of Social Media, what was once a money leak can be turned into a mechanism for exponential growth of both branding and sales. This begins by embracing your brand advocates.

Monty Python noticed that many of their skits were being upload to YouTube by various users often in a low quality format i.e. grainy, poor sound, etc… . The people uploading these videos were not evil gremlins looking to sink corporate profits. In fact they were true fans. If anything it was to pay homage to the troupe.

Instead of sending an army of lawyers at their loving fans, they decided to centralize the distribution by creating a Monty Python channel and thus made it easier for fans to find and share their content. This new channel provided a treasure trove of videos that were:

Official content is easy to find and trumps unofficial videos.

Their marketing team knew by view count of the fan videos which sketches were the most popular. Once identified, they took their originals and created snippets of these same sketches which were of much higher quality than any of the others available. These high quality snippets were then optimized to improve he chances of them being found via search. Remember YouTube is the second largest search engine after Google.

Once they laid all the ground work for getting their videos found and shared, they monetized the videos by incorporating links back to Amazon for their movies. So a clip from Life of Brian included a link in the description where you could buy the full movie.

Link and call to action in the description area

These four components worked because:

So why did they not kill the fan videos once theirs channel was running? The unauthorized videos were linked to and embedded on countless websites long before Monty Python created their own channel. By leaving those videos up, viewers had the opportunity to see official videos in the side bar and as one of the suggested videos featured once the video finished. Why give up all that free exposure? In the end, embracing a brand advocate vs. slapping them with a law suit generates more traffic and dollars. 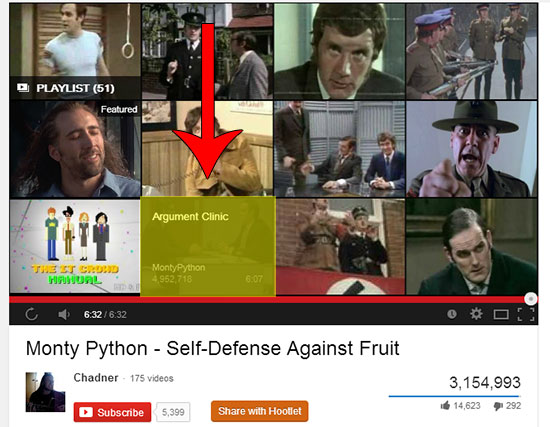 Laughing All the Way to the Bank

Brands have to embrace that they will never fully control their messaging or content in the social media era. The RIAA and MPAA are fighting a losing battle trying to squash the very people who love and buy the content they share online. Quibbling over a shared video or MP3 that garners millions of views that exposes your brand to new consumers is short sighted. Embracing brand advocates and controlling what they share by providing them content so good that they opt to use yours over other versions is far better than legal remedies. The smart companies will shift those dollars from legal over to marketing and take a page out of the Monty Python playbook.